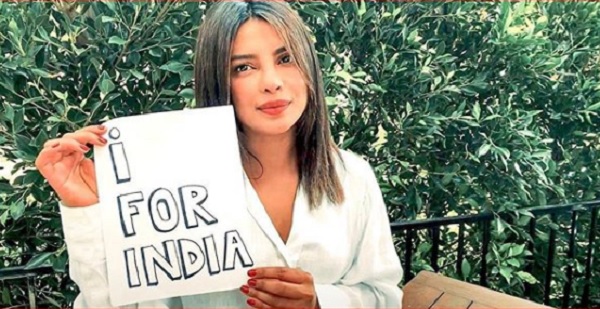 Priyanka Chopra Jonas, 38, was in Berlin, Germany filming while the world is battling the new coronavirus (COVID-19) pandemic. On November 2, 2020, she took to Instagram to share a photo of herself, her husband Nick Jonas, 28, and two of their three dogs.

Apparently, Priyanka is back home in Los Angeles, California, United States. She celebrated her homecoming by cruising in a red convertible with her husband and two of their pets.

In the photo, Priyanka is holding a chihuahua named Diana. Sitting in the back seat is a German Shepherd named Gino.

Diana was with Priyanka when she was in Berlin. They stayed at Schlosshotel Berlin by Patrick Hellman, a private luxury hotel in Berlin’s stylish green district of Grunewald.

Opposite Richard Madden, Priyanka is set to star in the Amazon series “Citadel.” She also has several upcoming films including “The White Tiger,” “We Can Be Heroes,” “The Matrix 4,” ‘Text For You,” “Sheela” and “Cowboy Ninja Viking.”

In “The White Tiger,” Priyanka will play Pinky Madam. Among her co-stars are Adarsh Gourav, Rajkummar Rao, Perrie Kapernaros, Nalneesh Neel, Vedant Sinha, Aaron Wan and Abhishek Khandekar, among others.

“Text For You” is an English remake of the German-language film “SMS Fur Dich,” which was released in 2016. Joining Priyanka in the cast of the remake are Sam Heughan and Celine Dion.

In these strange times it’s important to feel safe when you travel. So thank you to @patrickhellmannschlosshotel and their staff who took every precaution to make me, my team and @diariesofdiana feel safe and at home whilst filming in Berlin.   📷: @sophieschwarzenberger

Born in Jamshedpur, Jharkhand, India on July 18, 1982 to India Army physicians Ashok Chopra and Madhu Chopra, Priyanka traveled regularly and transferred to different schools when she was young.

In 1995, Priyanka moved to the U.S. and lived with an aunt. In 2000, she competed in Femina Miss India and finished second, making her the official candidate of India to Miss World.

On November 30, 2000, Priyanka was crowned Miss World 2000 at the Millenium Dome in London, England, United Kingdom. She bested 94 other candidates.

Nick and Priyanka started dating in May 2018 and got engaged in August 2018. They got married in December 2018 at the Umaid Bhawan Palace in Jodhpur, Rajasthan, India.

Picture this… I just turned 18 and won Miss World!! When I finally reunited with my parents among all the chaos on stage, the first thing my mom said to me was “babe, what’s going to happen with your studies?” #IndianMom #20in2020