[PHOTOS] Thailand vs England: Sam-a Gaiyanghadao, Jonathan Haggerty fight at ‘ONE: For Honor’ in Jakarta, Indonesia 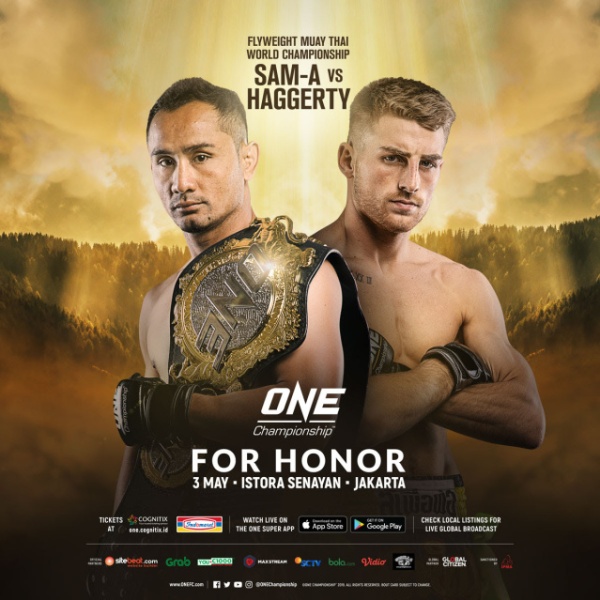 *More photos to be added after the bout

Thailand and England were among the 14 countries represented at “ONE: For Honor.” It was the second ONE Championship event in 2019 that took place in Indonesia.

Sam-A was one of the two fighters who represented Thailand at “ONE: For Honor” while Haggerty solely represented England. Cambodia, China, India, Japan, Kyrgyzstan, Lithuania, Malaysia, Russia, Scotland, South Korea and the United States were also represented.

Haggerty has been competing professionally since he was 9 years old. He was an International Sport Karate Association (ISKA) Super-Featherweight World Champion and a Roar Combat League World Champion.

“ONE: For Honor” marked Haggerty’s second ONE Super Series outing. When he made his promotional debut at “ONE: Eternal Glory” at the Istora Senayan in Jakarta, Indonesia on January 19, 2019, he defeated Joseph “The Hurricane” Lasiri, 27, of Milan, Italy.

Sam-A was 15 years old when he started training at the Petchyindee Muay Thai academy in Bangkok, Thailand. On May 18, 2018, he was crowned the inaugural ONE Muay Thai Flyweight World Champion by defeating Sergio “Samurai” Wielzen, 31, of the Netherlands at “ONE: Unstoppable Dreams” at the Singapore Indoor Stadium in Kallang, Singapore.

“ONE: For Honor” marked Sam-A’s third ONE Super Series bout. He was born Phithakammara Pawit in Buriram on October 13, 1983.

Atsushi Onari served as the referee of the championship bout between Sam-A and Haggerty. Jonathan Lai, Ian Cartwright and Olivier Coste served as the judges.

After five three-minute rounds, the bout was left in the hands of the judges. In the end, Onari raised the hand of Haggerty, who was declared the winner via unanimous decision.

Check the official results for “ONE: For Honor” on Conan Daily.