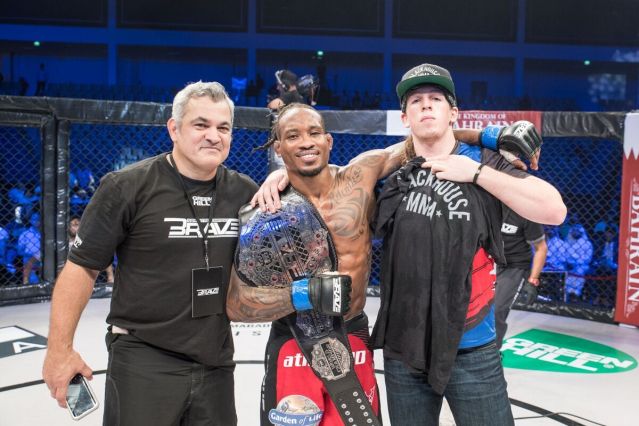 Bubba “Bad Man” Jenkins, 30, of the United States is interested in earning a new belt from a new division. Currently reigning as Brave Combat Federation Featherweight Champion, the American mixed martial artist is willing to move from featherweight to bantamweight just to face a rival he once defeated.

Boudegzdame and Loman will headline “Brave 22: Storm of Warriors” at the SM Mall of Asia Arena in Pasay City, Metro Manila, Philippines on March 15, 2019. If the French-Algerian challenger wins, Jenkins would like to face him once again but in the bantamweight division.

Jenkins believes that he has an edge on Boudegzdame. While the French-Algerian fighter’s fans support his move from featherweight to bantamweight, his American rival raised eyebrows.

On the other hand, Jenkins did not mention whether or not he is interested in facing Loman in the bantamweight division in case Boudegzdame loses at “Brave 22: Storm of Warriors.” Training out of Team Lakay in Baguio City, Philippines, Loman is the longest reigning Brave CF champion.

Including Jenkins and Loman, Brave CF currently has five reigning champions. The others are Abdul-Kareem “Pride of Palestine” Al-Selwady, 23, of Jordan, Jarrah “Jordanian Lion” Al Selawe, 29, of Jordan and Klidson de Abreu, 26, of Brazil, who are reigning in lightweight, welterweight and light heavyweight divisions, respectively.

Before joining Brave CF, Jenkins competed in Absolute Championship Berkut and Bellator MMA. He was also the 2011 NCAA Division I wrestling champion.

Brave CF has yet to announce the next challenger of Jenkins. The reigning Brave CF Featherweight Champion is training out of Black House MMA in Redondo Beach, California, USA.

Aside from Boudegzdame, Jenkins has brewed a rivalry with Brave CF featherweight contender Jeremy “JBC” Kennedy, 30, of Canada. After beating Marat Magomedov, 28, of Russia at “Brave 21” in Saudi Arabia on December 28, 2018, the Canadian fighter called out the reigning Brave CF Featherweight Champion.

Kennedy and Jenkins have gone back and forth on social media. However, no agreement has been reached for them to fight as of right now.