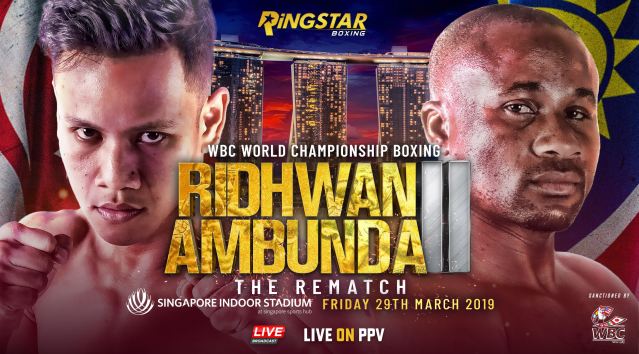 On January 14, 2019, Singapore-based sports media and entertainment company Ringstar Boxing announced 12 featured fights for its first show of 2019 happening on March 29, 2019 at the Singapore Indoor Stadium. The main event will feature the much anticipated rematch between Muhamad “The Chosen Wan” Ridhwan of Singapore and Paulus “The Rock” Ambunda of Namibia for the World Boxing Council Silver Featherweight title.

Another co-main event is a contest for WBC Asia Super Featherweight title. Nort Beauchamp of Thailand and New Zealand will face Defry Palulu of Indonesia for the title.

There will be four 4-round bouts in the undercard including a women’s match. Efasha Kamarudin of Singapore will face Febryanti Lubin of Indonesia.

This will be the sixth event of Ringstar since 2017 and the first of three shows in Singapore in 2019 with others slated for July 2019 and December 2019. The promotion’s fourth show is planned for Malaysia in October 2019.

For the event headlined by Ridhwan and Ambunda on March 29, 2019, fans will be treated to the most impressive array of up-and-coming boxers from Asia-Pacific, all matched up with the Ringstar credo in mind: 50/50, competitive boxing matches with integrity, designed to excite fans around the world. This is a key step in establishing the company as one of Asia’s fastest growing sports media properties.

Tickets range from $38 – $118 and go on sale January 18, 2019 at www.sportshub.com.sg/Ridhwan- Ambunda. VIP ringside sofa seats are at $1,888 comes with uninterrupted views of the ring and a personalized butler service with free flow drinks.

Early Bird discounts of 30 percent off all tickets till February 28, 2019 with promo code “Ringstar.” All fights will be broadcast live globally with more details to be announced soon.