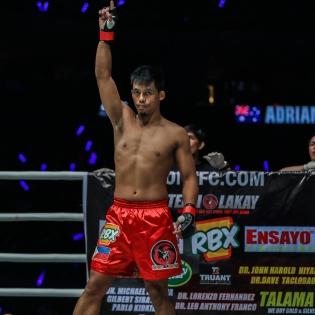 *UPDATE: Dae Sung Park was pulled out of the card due to medical concerns. He was replaced by Rahul “The Kerala Krusher” Raju, 27, of India and Singapore.

The Philippines and South Korea will be among the 14 countries that will be represented at “ONE: Conquest of Champions” on November 23, 2018. Taking place at the SM Mall of Asia Arena in Pasay City, Metro Manila, Philippines, it is the fourth and last ONE Championship event in the Philippines in 2018.

Park is an alumnus of “Rich Franklin’s ONE Warrior Series” Season 1, in which he knocked out Kimihiro Eto, 29, of Japan. After this, the South Korean fighter fought his first official ONE Championship bout at “ONE: Pursuit of Power” on July 13, 2018 at the Axiata Arena in Kuala Lumpur, Malaysia.

At “ONE: Pursuit of Power,” Park defeated Trestle “Jun Minion” Tan, 32, of Manila, Philippines via unanimous decision. This makes Banario the second Filipino fighter to face Park in ONE Championship.

Banario is the first ever ONE Featherweight World Champion who reigned from February 2, 2013 to May 21, 2013. He is currently fighting in the lightweight division of ONE Championship.

The Mankayan native is coming out of a loss to Amir Khan, 23, of Singapore. On September 8, 2018, the Singaporean fighter submitted his Filipinio opponent via rear-naked choke at “ONE: Beyond the Horizon.”

Banario and Park will compete in an MMA bout in the lightweight division.

“ONE: Conquest of Champions” Main Events

In the co-main event of the evening, Khan and Eduard “Landslide” Folayang, 34, of Baguio City, Philippines will compete for the vacant ONE Lightweight World Championship. [RESULT TO BE ADDED HERE]

In the main event, Brandon “The Truth” Vera, 41, of Manila, Philippines will defend his title as the reigning ONE Heavyweight World Champion and his challenger will be Mauro “The Hammer” Cerilli, 35, of Terracina, Latina, Italy. [RESULT TO BE ADDED HERE]

Tagged as: Dae Sung Park, Honorio Banario, ONE Championship, ONE: Conquest of Champions