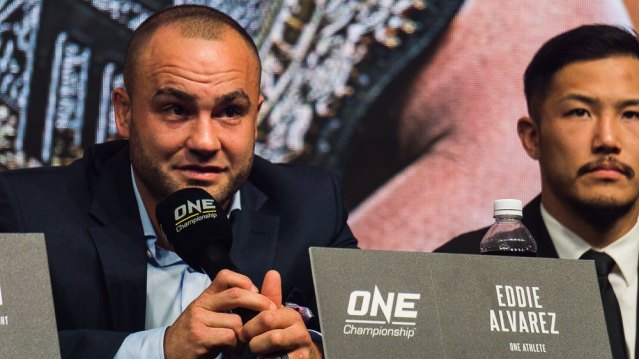 Newly signed ONE Championship athletes “The Underground King” Eddie Alvarez and Demetrious “Mighty Mouse” Johnson, who are both former UFC champions, attended the “ONE: Heart of the Lion” press conference at the Marina Bay Sands Expo and Convention Center in Singapore on November 7, 2018. During the event, the promotion announced a World Grand Prix for the flyweight and lightweight divisions.

“This is where true martial arts lives,” Alvarez said of Asia. “I’ve been away from Asia so long. It’s good to be back.”

Alvarez has been competing professionally since 2003. He is the only mixed martial arts in history to hold titles in the UFC and Bellator MMA.

“It was in Asia where I made a name for myself and started my career,”  Alvarez said. “Everything has come full circle for me. I can’t say how excited and grateful I am to be part of the ONE Championship family.”

“I feel like I found my way again with ONE Championship,” Alvarez stated. “I can respect my opponents and I can go in and fight like a man. I know my lifelong martial arts journey will be truly appreciated here.”

ONE Championship chairman and CEO Chatri Sityodtong graced the “ONE: Heart of the Lion” press conference. UFC fighter Sage Northcutt was also one of the special guests.

The “ONE: Heart of the Lion” fight night will take place at the Singapore Indoor Stadium in Kallang, Singapore on November 9, 2018. Here is the complete fight card:

Ticket information for ONE: HEART OF THE LION is available at www.onefc.com.

Tagged as: Bellator MMA, Eddie Alvarez, ONE Championship, ONE: Heart of the Lion, UFC