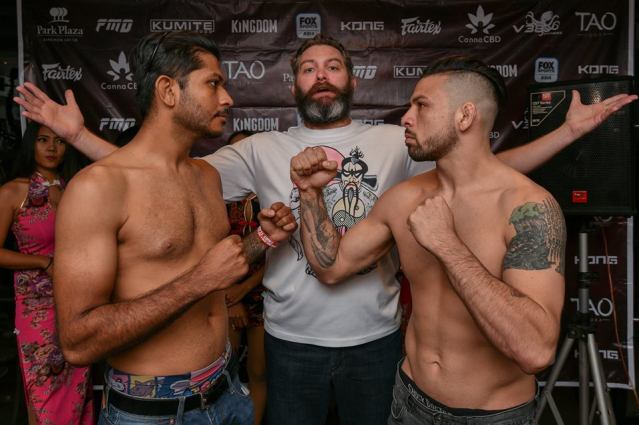 The United States and Malaysia were represented at the most recent Full Metal Dojo event. The weigh-ins of the 18 mixed martial arts competing in the event titled “Full Metal Dojo: Big Trouble in Little Bangkok” was hosted by the Clubhouse Sports Bar and Grill in Bangkok, Thailand on November 2, 2018.

In the sixth bout of the evening, Javi “Honey Badger” Trujillo of Chico, California, USA and Vinod “Cookie Monster” Greywal of Malaysia battled it out in the welterweight division. It was the fourth professional MMA bout of the evening.

The referee put a stop to the welterweight bout between Trujillo and Greywal at 4:24 of Round 1. The American contender submitted his Malaysian opponent via rear-naked choke.

Training out of the UFC Gym Vietnam in Ho Chi Minh City, Vietnam, Greywal made his professional MMA debut at “Full Metal Dojo: Big Trouble in Little Bangkok.” He accepted the bout in five days notice, replacing Daniel “Kiwi” Kerr of New Zealand who was originally set to face Trujillo.

In the co-main event of the evening, Thai fighters Loma Lookboonmee and “Pocket Rocket” Suwanan Boonsorn competed for the FMD Women’s Atomweight Championship. The latter submitted the latter via armbar at 2:06 of Round 1.

In the main event, Glenn “Teddy Bear” Sparv of Finland and Mehdi Bagheri of Malaysia competed for the FMD Middleweight Championship. The Finnish contender knocked out his Iranian opponent via head kick at 2:52 of Round 2.