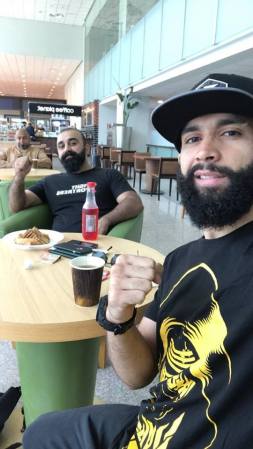 After three five-minute rounds, Jeremy “The Juggernaut” Pacatiw, 22, of Kapangan, Benguet, Philippines defeated Uloomi “Kratos” Karim, 27, of Islamabad, Pakistan in the co-main event of “Brave 17.” The moments after the fight was what made the fight event more memorable.

Pacatiw and Karim are representing Team Lakay of Baguio City, Philippines and Team Fight Fortress in Islamabad, Pakistan, respectively. Upon being declared the winner of the “Brave 17” co-main event, the Team Lakay fighter took the opportunity to thank his opponent for the display of heart alongside each member of his opponent’s fight team and home country.

The spirit showcased by Pacatiw was reciprocated by Karim, who also praised the Team Lakay fighter and Brave CF. Team Fight Fortress founder and head coach Ali Sultan stated, “The bout is one of the most inspiring that we have witnessed.”

“It is one among the rarest bouts where two fighters give everything in the cage and the winner is the sport of MMA and the fight fans,” Sultan continued. “The bout will be remembered as one among those glorious moments that set off mixed martial arts into the heart of Pakistan.”

“With such initiatives, we believe the sport has a remarkable future,” the Team Fight Fortress coach added. “Also, the heart and sportsmanship displayed by both the fighters is an example for the MMA world to follow.”

The bantamweight fight between Pacatiw and Karim was one of the highlights of “Brave 17” as both fighters took the crowd to their feet with three rounds of intense action showcasing striking, grappling and wrestling between the two. What started as a dominant standup action in the first round dominated by Pacatiw made the audience feel that Karim would not go beyond the second round but the hometown hero came back strong to dominate the second round with an eye swollen shut.

The fight went to the third round showcasing intense back-and-forth action between the two warriors. In the end, the judges decided in favor of the Team Lakay fighter who gained the advantage.

Currently, Pacatiw holds a professional MMA record of 5 wins and 3 losses while Karim has 5 wins and 5 losses. Watch their full “Brave 17” bout here: