Indonesia vs Bangladesh: Rudy Agustian, Asraful Islam to clash at ‘ONE: Pursuit of Greatness’ in Yangon, Myanmar 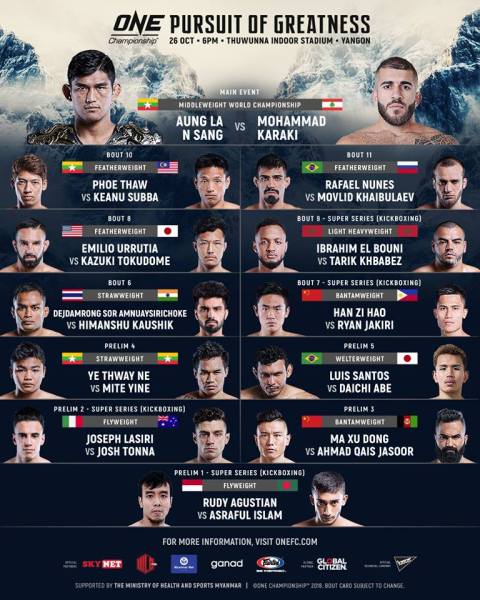 On October 26, 2018, ONE Championship will hold “ONE: Pursuit of Greatness” at the Thuwunna Indoor Stadium in Yangon, Myanmar. The fight card features three ONE Super Series kickboxing contests and nine mixed martial arts matches.

In the first bout of the evening, Rudy “The Golden Boy” Agustian, 33, of Tangerang, Indonesia will face Asraful “Warrior” Islam, 22, of Dhaka, Bangladesh in an MMA match in the flyweight division. It will mark the Indonesian contender’s ONE Championship debut.

A Muay Thai specialist, Agustian is a former Indonesian Flyweight Champion. He holds a professional MMA record of 4 wins and 2 losses.

On the other hand, Islam has 2 wins and 1 loss as a professional MMA fighter. He is also a practitioner of Jeet Kune Do, the martial art developed by Bruce Lee, and a professional boxer with a record of 11 wins and 3 losses.

Islam is a former National Boxing and Wushu Champion and the former UFI Bantamweight Champion. He is representing Warriors Academy of MMA.

In the main event of “ONE: Pursuit of Greatness,” two-division world champion “The Burmese Python” Aung La N Sang, 33, of Myanmar will defend his ONE Middleweight World Championship title from undefeated fighter Mohammad “O Lutador” Karaki, 27, of Lebanon. The former is also the reigning ONE Light Heavyweight World Champion.

“ONE: Pursuit of Greatness” will be the second ONE Championship event in Myanmar in 2018. Here is the complete fight card:

Tagged as: Asraful Islam, ONE Championship, ONE: Pursuit of Greatness, Rudy Agustian