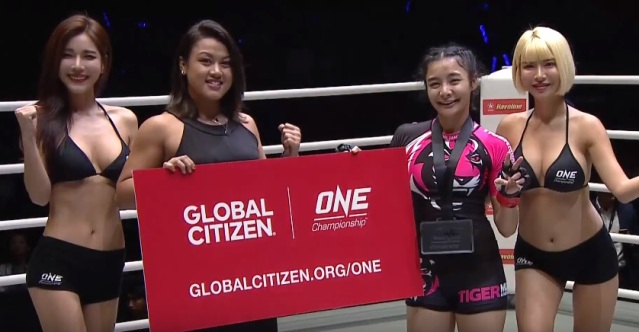 On October 6, 2018, Rika “Tiny Doll” Ishige, 29, of Bangkok, Thailand competed in ONE Championship for the sixth time. She was one of the seven Thai athletes who competed at “ONE: Kingdom of Heroes” at the Impact Arena in Bangkok.

“ONE: Kingdom of Heroes” featured eight ONE Super Series contests and six mix martial arts bouts. In the fourth bout of the evening, Ishige competed in an MMA bout in the women’s atomweight division against Bozhena “Toto” Antoniyar, 23, of Yangon, Myanmar.

Referee Yuji Shimada put a stop to the MMA atomweight bout between Ishige and Antoniyar at 2:48 of the first round. Ishige, who is of Thai and Japanese descent, knocked out her Burmese opponent.

The win at “ONE: Kingdom of Heroes” improved Ishige’s professional MMA record to 4 wins and 2 losses. On the other hand, Antoniyar now has 1 win and 1 loss.

It was Global Citizen ambassador Ann Osman who present the award to Ishige. The former is a former ONE Championship athlete.

When Ishige joined ONE Championship, she established two consecutive wins. On March 11, 2017, she knocked out Audreylaura Boniface Raphael via punches in the first round at “ONE: Warrior Kingdom.”

On May 26, 2017, Ishige submitted Nita Dea via rear-naked choke at “ONE: Dynasty of Heroes.” But on August 5, 2017, the Thai-Japanese fighter faced her first professional MMA loss as she was submitted by Jomary “The Zamboanganian Fighter” Torres of the Philippines via rear-naked choke in the second round at “ONE: Kings and Conquerors.”

Watch the “ONE: Kingdom of Heroes” livestreaming here:

Tagged as: Bozhena Antoniyar, ONE Championship, ONE: Kingdom of Heroes, Rika Ishige