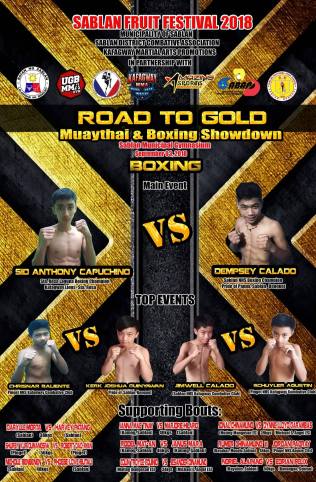 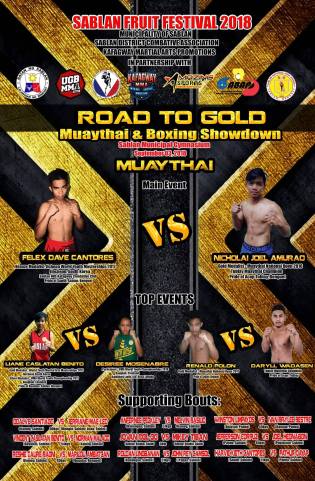 Felex Dave Cantores of Sawili, Sablan, Benguet and Nicholai Joel Amurao of Acop, Tublay, Benguet are among the headliners of the “Road to Gold” Muaythai and boxing showdown. The combat sports event is in line with the 2018 Sablan Fruit Festival, which is the fourth staging of the festival.

“Road to Gold” will take place at the Sablan Municipal Gymnasium in Sablan on September 3, 2018. Cantores and Amurao will compete in the main event of the Muaythai card.

Cantores was a bronze medalist at the 2017 Jicheon World Youth Masterships in Jincheon, South Korea. He is representing the Kafagway Combative Club of Sablan National High School.

On the other hand, Amurao is a Tublay Muaythai Champion. He was a gold medalist at the Muaythai National Open 2016.

In the co-main event of the Muaythai card, Liane C. Benito of Bayabas, Sablan will compete against Desiree Mosenabre of Sta. Rosa, Laguna. The former is representing Team Kafagway and a gold medalist at the 2017 World Youth Martial Arts Masterships while the latter is from Kafagway Lions and a participant at the recently concluded 2018 World Youth Muaythai Championship in Bangkok, Thailand.

On the boxing card, Anthony Capuchino from Kafagway Lions of Sta. Rosa will face Dempsey Calado of Pappa, Sablan in the main event. In the co-main event, Chrisnar Baliente of the Kafagway Combative Club of Pinget National High School will battle it out with Kerk Joshua Gunyawan of Sablan.