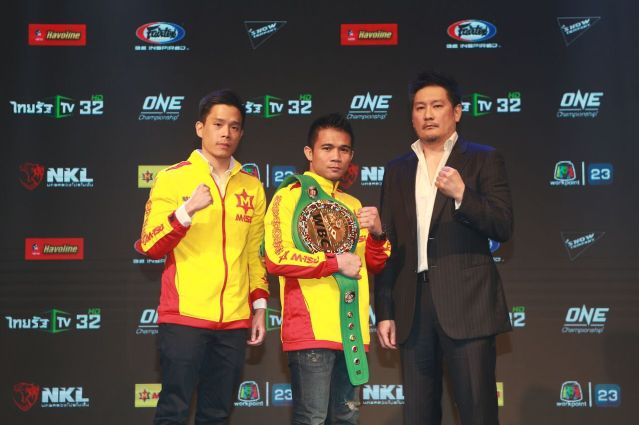 World Boxing Council vice president Police Gen. Kovid Pakdeepoom recently expressed his appreciation to ONE Championship for its contribution to the growth of martial arts in Asia. On July 9, 2018, he was one of the promotion’s special guests at the press conference for “ONE: Kingdom of Heroes” at the W Hotel in Bangkok, Thailand.

“ONE Championship has made groundbreaking initiatives in the development of mixed martial arts and other forms of martial arts in Asia and around the globe,” Pakdeepoom stated.

“Certainly, there’s so much that everyone should be excited about this event in Bangkok.”

“ONE: Kingdom of Heroes” will take place at the Impact Arena in Bangkok, Thailand on October 6, 2018. With Thai boxing superstar Srisaket Sor Rungvisai, 31, in the main event, it marks the first time ONE Championship is holding a boxing match.

“We are thrilled to work with ONE Championship for the upcoming event in October,” the WBC vice president said. “Our association with a world-class organization like ONE Championship satisfies our goal in nurturing the legacy of boxing across the globe.”

During the press conference, ONE Championship chairman and CEO Chatri Sityodtong announced the organization’s partnership with Nakornloung Promotion to co-promote Srisaket’s “ONE: Kingdom of Heroes” bout. Both the boxer and his promoter, Nakornloung Promotion promoter Thainchai Pisitwuttinan, attended the press conference along with Petchyindee Academy managing director and Rajadamnern Stadium promoter Nuttadaj Vachirarattanawong.

Along with Srisaket, the other Thai fighters who will compete at “ONE: Kingdom of Heroes” were present during press conference, Shannon “OneShin” Wiratchai, 29, and Rika “Tiny Doll” Ishige, 29, will compete in MMA bouts while Yodsanklai IWE Fairtex, 33, Nong-O Gaiyanghadao, 32, and Petchmorrakot Wor. Sangprapai, 24, will compete in ONE Championship’s striking-only league ONE Super Series.

ONE Championship crowned Kai “Killer Bee” Ting Chuang, 23, of Chinese Taipei as the inaugural  ONE Super Series Kickboxing Atomweight World Champion at “ONE: Battle for the Heavens” at the Guangzhou Tianhe Gymnasium in Guangzhou, China on July 7, 2018. Here is a recap of the event:

Ticket information for ONE: KINGDOM OF HEROES is available at www.onefc.com.